A lot of jewellery is sold and advertised as damascene which is not actually damascene, hopefully we will clear up a few misconceptions here.

Firstly what actually is damascene?
If we use the standard typical and correct Wikipedia response,  Damascening is the art of inlaying different metals into one another—typically, gold or silver into a darkly oxidized steel background—to produce intricate patterns similar to niello. The English term comes from a perceived resemblance to the rich tapestry patterns of damask silk.

Damascene style jewellery is old, its evolution can be traced back to Damascus, hence the term ' Damascene ' The manufacture of damascene jewellery in recent history is focused in Japan and Spain and is still manufactured there to this date.

Things to note about genuine damascene
The back ground is always very dark, its formed from oxidized , bronze, steel or iron.
In true damascene the designs are etched and silver or gold foil is layered onto the designs. ( Usually 18k or 24K or high quality silver )
Faux Damascene is usually enamel coated for the darkened colours
Faux damascene usually has raised designs with a white colour wash.

Toledo Damascene
Whilst Toledo in Spain is actually a manufacturing hub for the production of damascene jewellery, Toledo damascene is often used as a byword for faux damascene. ( If you are after genuine damascene, be careful, ask questions any genuine seller will be more than happy top answer them )

Spanish Damascene:
Again this term sums up the product, its damascene jewellery manufactured in Spain.

Amita/ Shakudo Damascene:
It should possibly be referred to as Shakudo damascene, but its usually not. A popular manufacturer in Japan in the 19th century  led to this term been widely accepted in the western world. Both terms are commonly accepted.  The designs usually feature fans, mountains and Japanese style themes.

To help you out there is nothing better than seeing products before you so here are some examples. 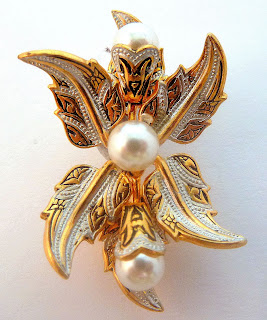 This brooch is formed from faux damascene, set with faux pearls. Notice the raised white areas, its still a very pretty brooch, but its not damascene. 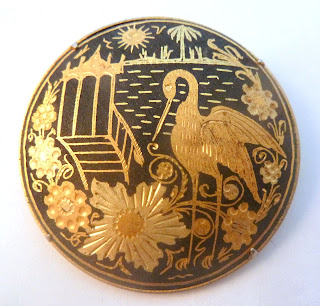 This brooch is genuine damascene in a Japanese Shakudo design, featuring a stork or crane bird, ( The crane was a symbol of good luck and prosperity in Asia ) 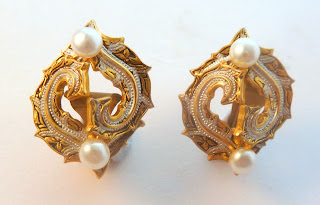 Hope this advice helps, we will hopefully publish some more examples up soon.
Posted by Rachel at 16:26