Our favourite holiday of the year, Halloween is on its way so ' treat ' yourself to a some spooky bling and check out some of the superstitions and beliefs of these Halloween symbols. 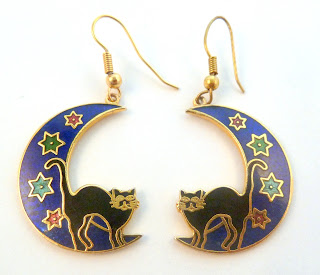 These black cat and crescent moon earrings are formed from cloisonne enamel and are also available in red. 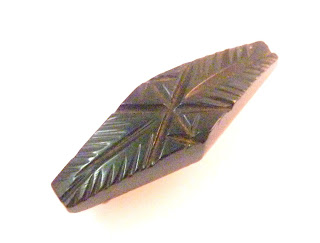 This antique Victorian brooch, is hand carved from a piece of Whitby Jet, an unusual antique spooky talking point.


In the Victorian era mourning jewellery was often worn to mark the passing of a loved one, popularized by queen Victoria after the death of her beloved Albert, Jet became the only accepted court jewellery.  Some of the mourning style pieces have concealed sections contains a lock of the departed's  hair. 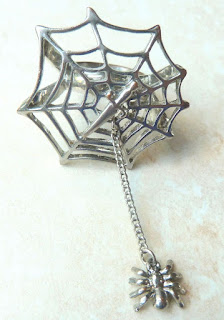 This spider web ring complete with dangling spider would make a quirky and fun accessory to a Halloween outfit.

Nowadays spiders get a pretty unfair deal when it comes to Halloween, being seen as some sort of spooky witches helper.  In medieval times if you saw a spider on Halloween it was actually believed to be the soul of a loved  one watching over you, prior to this they were believed to be fore tellers of prosperity and it was bad luck to kill one. 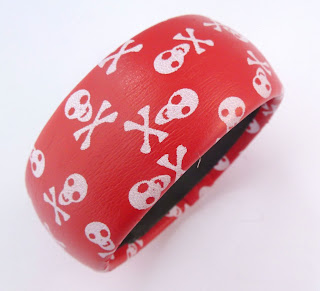 This wide chunky skull and cross bone bangle would make a great addition to any pirates haul of treasure.


The skull and cross bone symbol whilst perhaps most commonly associated with pirates, dates back to the late middle ages as a symbol of death. It's still commonly used today as a hazard symbol often used to denote poisonous chemicals.

Thanks for reading through and wishing you all a spooktacular Halloween.