Luckenbooth Jewellery and its history

Luckenbooth - You may see this term used to describe certain types/styles of  heart shaped jewellery.  What does it actually mean?  Well its not a new type of jewellery, this particular design goes back to the 1600's and originates from Scotland.  A lot of jewellery was sold from Scotland  and continues to be so,  but the Luckenbooth originates wholly from there.  In its basic earliest designs it was a heart with a crown above it, though through time it has being adapted, so you will find two linked hearts, with a crown, two crowns and hearts and embellishments such as doves.


The Luckenbooth to the left is a 80's pewter formed pendant by Scottish designer David William Harkison.  With stunning simple lines, in the more traditional Luckenbooth style.

Luckenbooths got their name from where they were sold the locked booths of jewellers.  The original ones were formed mainly in silver and if stones were to be used, it was usually garnets and they were mainly designed and sold as brooches.  Later designs have moved this popular symbol into all jewellery forms, so you will find luckenbooth, earrings, necklaces and rings, amongst other things. 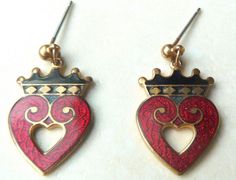 On the right are a pair of  cloisonne enamel, Luckenbooth earrings, by ' Fine Enamels '  Fish and Crown.  Designed in vibrant coloured enamels, with small dainty drops, a stunning late 1990's - 2000's.

Originally exchanged as a token between lovers but as times moved on they began to be circulated as a protection against witches/evil. They were sometimes pinned to a baby's cradle for protection, or worn by nursing mothers,  but whether believed in as a token of love or a talisman against evil, they are still vibrant and popular today. 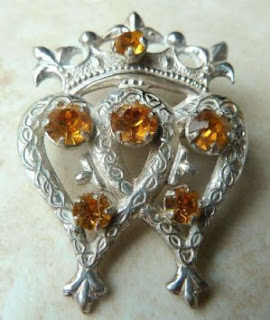 To the left is a vintage sterling silver double luckenbooth heart brooch by renowned Scottish Silver smiths the ' Ward Brothers ' studded with faux citrine stones and signed WBS Scotland to its back, a really pretty piece.

We try to always hold some Luckenbooth designs in stock, on our Scottish and Celtic jewellery page, as well as other popular Celtic and Scottish Designs.
Posted by Rachel at 06:29 No comments: