Each time I go out now,  I'm noticing patches of fallen leaves scattered sparsely upon the floor. There's definitely no denying it, Autumn/Fall is on its way.  Whilst I will miss Summer,  Autumn is actually my favourite season. I love the way the nights slowly lengthen and the feelings of cosyness I get from being wrapped up warm inside on colder days.  But my absolute favourite thing about Autumn is the colour. 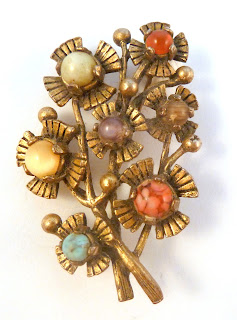 This vintage brooch by British designer Miracle is reminiscent of the vibrant colours on display in Autumn.


For a few short weeks in Autumn the  natural world treats us to one last explosion of colour before winter arrives and the leaves fall away.  If you want to accessorize to compliment the season you could try reflecting some of the vibrant colours around you. 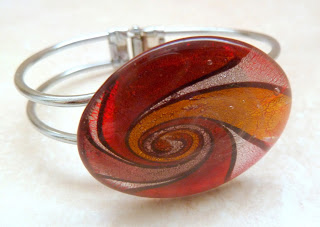 This foiled glass bangle showcases some of the richness of colour seen during Autumn.


If you wish to go further than just wearing autumnal colours you can incorporate some leaves or even berry style pieces to your jewellery box. 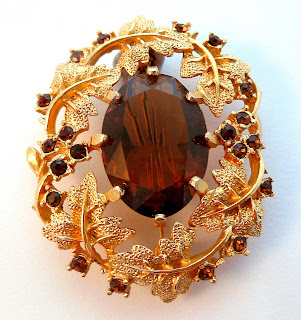 More jewellery inspired by Autumn is available on our Autumn dedicated pinterest board.
Posted by Rachel at 12:48 No comments:

August is an unusual month in that it has three birthstones associated with it. Peridot, spinel and sardonyx. Peridot a lovely green gemstone is perhaps the most well known one of the three and is also associated with prosperity luck and good fortune.( All great reasons to wear it ! ) 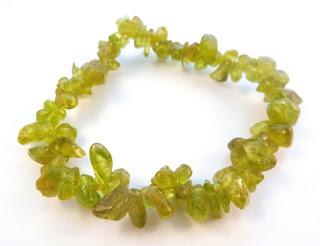 This tumbled peridot gemstone chip bracelet is an excellent and affordable way to add some peridot bling to your wardrobe.

Peridot is one of the oldest gemstones,  ancient Egyptians were some of the first people to appreciate its beauty.  The largest is owned by the Smithsonian Institution in Washington D.C  and is an impressive 319 carats. Amazingly peridot is the only gemstone found inside meteors and is the first gem to be discovered on another planet, in 2003 deposits were discovered on mars!

Sadly not from a meteor, but this vintage sterling silver and peridot modernist style ring is still stunning.


Spinel is the most recent stone associated with birthdays in august, it has been used as a gemstone for centuries. Available in a variety of colours it is often mistaken for other gemstones, perhaps one of the most famous ones is the ' Black Prince's Ruby ' found in the state crown! ( For centuries it was believed to be a ruby, but is actually a substantial uncut spinal of approximately 170 carats ). As a gemstone spinel is believed to have soothing and calming qualities. 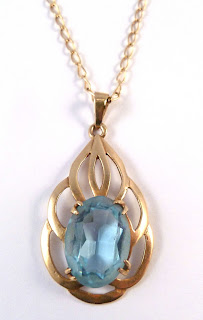 A large icy blue spinel is set in an ornate oval open work nine carat gold surround, in this elegant vintage pendant from the early 1970's.

Sardonyx actually is the traditional birthstone for August, it's a type of banded onyx gemstone and is believed to stand for courage and victory, sardonyx is a popular stone used to carve cameos.
Posted by Rachel at 11:10 No comments: